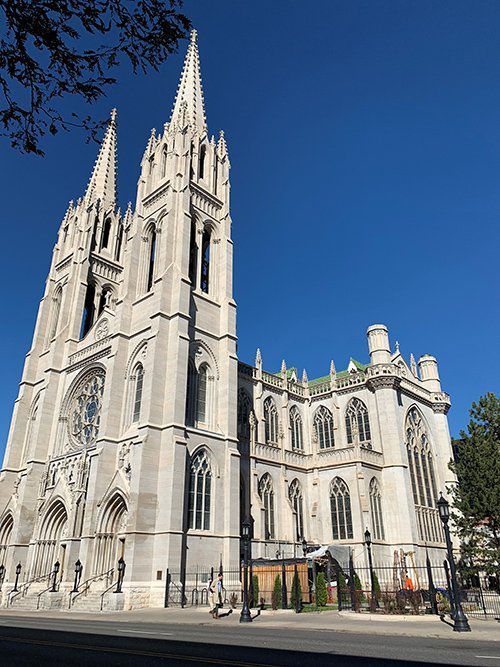 As it does every year, Doors Open Denver has opened a few new doors. This year’s event includes the return of the Cathedral Basilica of the Immaculate Conception, plus Denver Fire Station #1, and Ross-Broadway Branch Denver Public Library. While churches, fire stations, and libraries may not be conventionally thought of for their architecture, Denver Architecture Foundation Executive Director Pauline Herrera Serriani said these sites are far from ordinary. “Fire departments, libraries, and churches have some of the most stunning architecture in our city, so they are some of the most popular sites,” Serriani said.

Cathedral Basilica of the Immaculate Conception, built in 1912, was designed by architects Bob Saas and Leon Coquard. Located just one block from the historic Colorado State Capitol, the cathedral stands tall: its crocketed spires reach 210 feet. Inside, visitors can ooh and aah at the arch vaulted ceiling and ornate spiral staircases that ascend to balconies overlooking the church altar. “The cathedral is a stunning example of the French Gothic style of architecture,” Herrera Serriani said. “We’re excited to have it on our list of sites because it has been under renovation for years, so now people can experience it in all of its glory again.”

Ross-Broadway Branch Denver Public Library, built in 1951, was designed by Denver native architect Victor Hornbein, who also designed the Denver Botanical Gardens. “The library exemplifies modern style architecture, specifically the Usonian style that was made popular by Frank Lloyd Wright,” Herrera Serriani said. The Usonian style of architecture is known for its use of dramatic cantilevers and abundant clerestory glass.

Fire Department #1 was built in 1973; however, the original designer behind the building is unknown. Herrera Serriani says this is Denver’s only example of the International Style architecture, with the brick and concrete construction, making it a unique addition to this year’s sites list.

All of the arts and culture activities offered during the event will take place in the La Alma-Lincoln Park, a historically Latino neighborhood. Each of the architecture-influenced activities will dive into the culture of the neighborhood. The activities include poetry reading with Bobby LeFebre and Adobe Village Construction with Alma-Lincoln native Carlos Frésquez.

Doors Open Denver runs this weekend, Sept. 21-22. Free, self-guided open sites will be open from 10 a.m. to 4 p.m. each day. Expert-guided Insider Tours will run from 9 a.m. to 5 p.m. each day at $12 per tour. Visit denverarchitecture.org for more information on select tour and activity times.