If you were watching, you saw a blank wall on the parking garage at 9th and Colorado in December. In January and February: a father and son perched on scaffolding and painting by hand (shivering). Finally, on the day of the blizzard in March: a sparkling, 65-by-65-foot Kevin Sloan original painting titled “The Mischief Makers.”

Here’s a Look at the Making of the Mural

1. An arts enthusiast offers the canvas—and the money.
Continuum Partners has been redeveloping the old University Hospital property, now known as “9CO,” and Marc Falcone, its CEO, loves art. Falcone invested $1 million in local artists whose 700 works adorn the Born Hotel’s public spaces and guest rooms. “In every one of our larger projects, we found different ways to incorporate some kind of artistic moment,” says Falcone. “That garage needed to be enlivened, and a couple of blank walls were just screaming for some kind of engaging interaction with the community.”

2. An artist is chosen.
Falcone hired John Grant of Public Art Services to coordinate the project. Grant approached Sloan and persuaded him to toss his brush into the ring. “I can’t do that—it’s too big,” Sloan said, but Grant explained, “No, no, no, you would do a painting, and the mural painters would enlarge it.” Sloan, whose paintings sell for upwards of $10,000, could not resist the chance to bring his work “out in a public way, on a grand scale.” Sloan’s portfolio, which often features animals as a metaphor for nature’s fragility, won the support of Falcone’s team and capital partner, CIM.

3. The model is created.
Sloan went to work with colored pencil and watercolor to create a concept that would be appropriate for public consumption, wouldn’t stop traffic, and could fit the square wall dimensions. Says Sloan: “Living in Colorado and the West, I think the issues of the environment at threat, in peril even, are in the foreground because we see the difference between the wild, natural world and the manmade world.” He envisioned a creature made of delicate china, balanced precariously over Denver. Sloan then translated the sketches into a 3-by-3-foot painting that now hangs at the adjacent Theo luxury apartments.

4. The muralists mix old-school technique with cutting-edge technology.
Chris Krieg and his son, Will, used a technique from the Michelangelo era, when murals were outlined through scaled-up paper that had been dotted with tiny holes through which charcoal was dusted. Using software, the Kriegs generated a reproduction of Sloan’s painting scaled up to 65 by 65 feet and broken into portable sections.

5. The muralists hand-paint the wall.
The Kriegs spent six weeks aboard a 50-foot swing stage, painting in an order that looked random but made total sense to them. Their oil-based paints perform well in temperatures above zero—“which is what the wind chill was on some of those days,” Will says—with Chris matching Sloan’s colors. “I’ve been doing this so long, I don’t even know how to tell somebody to mix color. I just know,” Chris says. They finished in six weeks, returning March 12 to add a few touches requested by Sloan.

6. They pack up and leave behind a provocative, evocative work of art.
Driving by, you won’t notice that the bear is balanced on an extension cord that is about to come unplugged, or that bees are buzzing around its nose. “It’s not a hard-edged political cartoon,” says Sloan. “It’s sometimes more interesting to start an image, especially in a public venue, with something a little softer.” 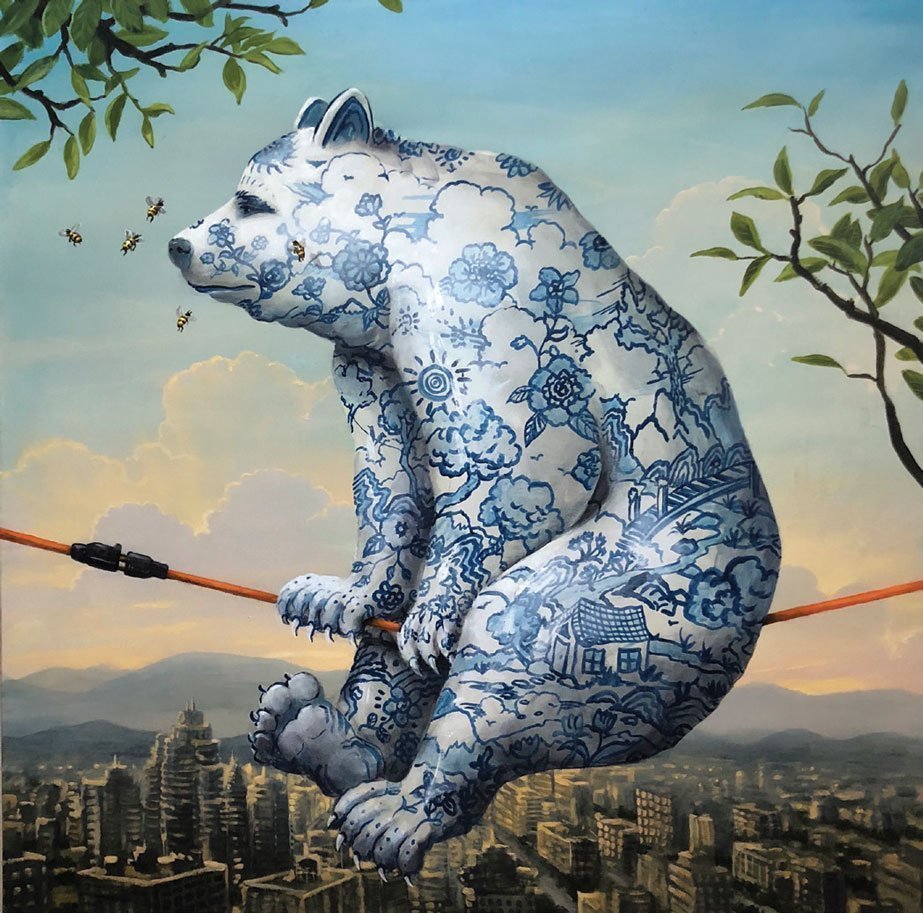